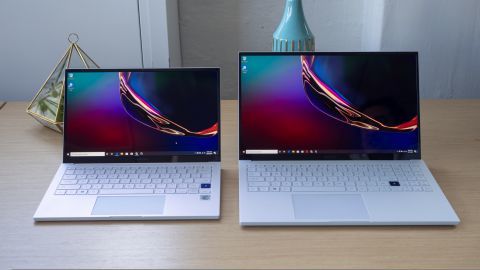 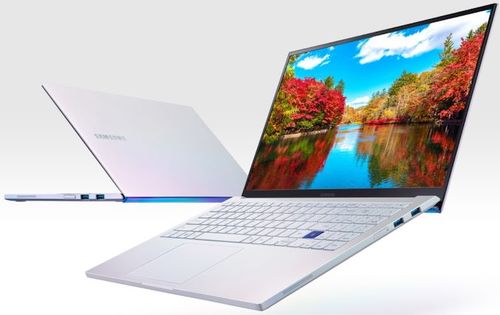 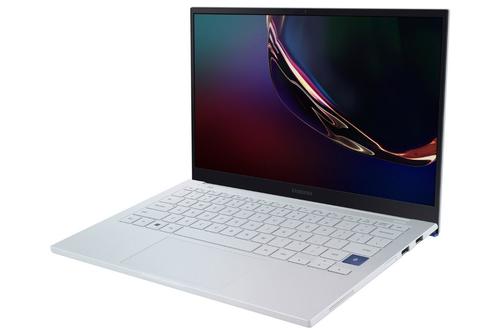 Both the 13 and 15-inch Galaxy Book Ion are a huge step up from their predecessors. They’re more similar in design to Samsung’s very own Notebook 9 Pro released early this year. Which, in a way, makes the Pro moniker on the older device pretty outdated.
The previous Samsung laptops had rounded edges which made them look like copycats of the MacBook Air. The new Galaxy Ion, however, has sharper edges giving it a more industrial look. The bezels are also slimmer on all sides except for the bottom. If you look at it from the side, you’d be reminded of classic Lamborghini design with all the sharp edges. It might just be one of the most aerodynamic designs for a laptop.
Speaking of classic cars, the Galaxy Book Ion also has a clever way to get rid of the heat generated through active use. Once you flip the screen up the lower part of the lid raises the bottom of the laptop to give way for the vents underneath. It’s not an original Samsung concept but it’s nice to know that they’ve thought about heating issues. Hearing things about Apple’s problems with heat management makes one cautious about things like these.
The materials also lend credence to the industrial look and feel that they’re going for. Its full magnesium construction makes not only feel nice to the touch but also sturdy.
Overall, the build quality on both the 13 and 15-inch models are what you’d expect from a modern laptop above $1,000 – Slim, made of some sort of metal, but most of all, feel and look premium.

One of the biggest aspects that separate the Galaxy Book Ion from the existing Galaxy Books is that it’ll be powered by an Intel processor – a 10th gen Comet Lake to be exact. This is a huge difference because there are a ton of desktop apps that might now work with the tablet/laptop hybrids that Samsung currently has out now.
This is not a knock on the power of the Qualcomm Snapdragon 850 or the Snapdragon 8cX that the Galaxy Book 2 and the Galaxy Book S comes with. They’re both very capable processors which can compete with Intel in terms of raw power. It's mainly the architecture of the chips that limit it.
This is probably why the Galaxy Book Ion and the new Galaxy Book Flex were released. Since they’re both on Intel’s architecture, they can be used for all of the available applications available for Windows 10 users.
You also wouldn’t have to sacrifice transfer speeds for your drives because it’s equipped with an NVMe storage that you can configure as you buy it. The 15-inch flavour would also come with an additional M.2 slot expansion that you can use if you need more room.
The 15-inch model having more to offer would be a common theme for the rest of these aspects. It has, for example, another SODIMM slot if you want to add more to the 16GB RAM that it comes with. There’s also more room to squeeze a dedicated graphics card on it. Samsung chose to go for a GeForce 250MX with 2GB of VRAM. Both of these are not present on the 13-inch model so opt for the bigger one if you need these features.

If there’s anything that the Galaxy Book Ion is going to get famous for, it’s the screen. It’s got an ultra-crisp QLED screen that used to be only found on Samsung TVs. This on its own already makes it a content consumption champion. This gives it accurate colour reproduction and outstanding brightness.
It’s even got a dedicated Outdoor mode where it jacks the brightness up to 600 nits so you can keep using it even in extremely well-lit scenarios. But naturally, this takes a little bit of battery. Turn it back to normal and you’ll get a maximum of 400-nits which is still brighter than a lot of other laptops in the market.

When I first read that there's going to be Qi Wireless charging involved, I immediately became sceptical. As far as I know, there aren't wireless chargers yet that can charge a laptop at an acceptable speed. But when I realized that they’ll be using the charging technology to charge other devices, it began to make sense.
They’ve built a wireless charging pad underneath the trackpad so you can use it to charge your wireless devices. Running low on your smartphone battery? Easily charge it up by putting it on top of your touchpad. Especially you’ve got a lot of wearables such as earphones and watches, this can be a killer feature.
However, it's not something that laptop buyer would have at the top of their lists. It’s a nice thing to have but not necessarily something that you’d look for.
Galaxy Book Ion
Eyeforaneye November 13, 2019 6:13am
Wireless charging is a great feature. In my opinion, that's a huge selling point! With so many devices that rely on charging these days, having a simple and effective way to keep them powered up is essential.
Reply
Lachlan86 November 17, 2019 8:25am
I just posted an article that lists a great deal for Chromebooks coming up on Black Friday. It may be the perfect time to finally purchase one - I've been considering it for ages.
Reply
Setup Item